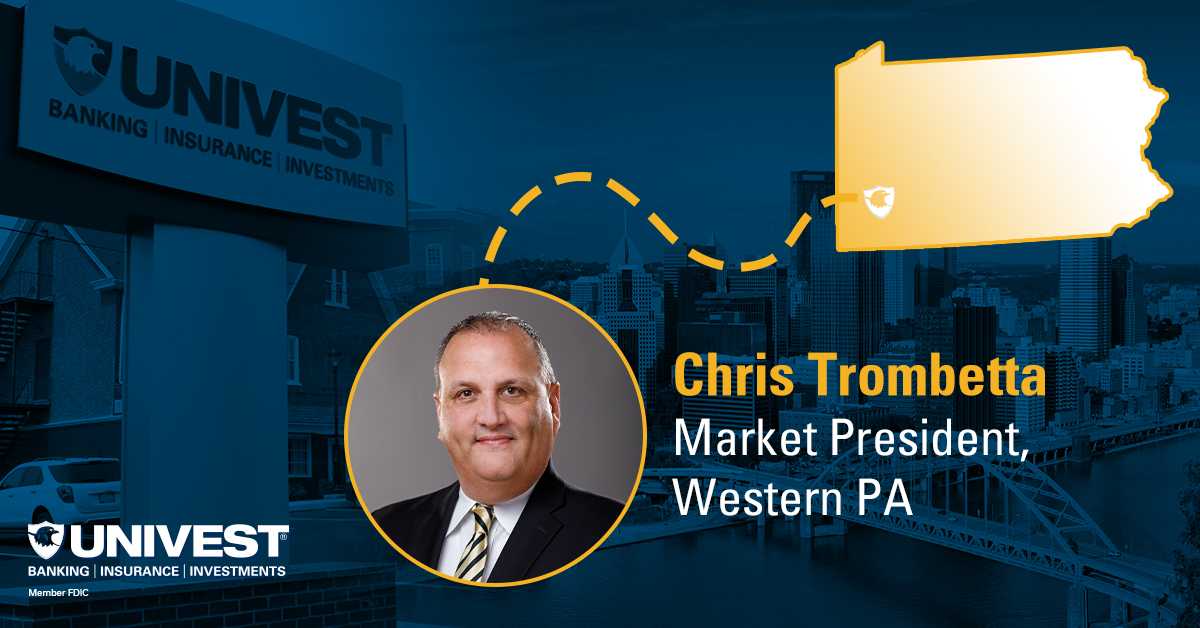 Like a lot of kids born and raised in Western Pennsylvania, my dream job was to be the general manager of the Pittsburgh Steelers. When that plan didn’t come to fruition, I gave banking a try. Fortunately, I’ve found success in the banking industry and now serve as Univest’s Market President for Western Pennsylvania.

As I start this new chapter of my career leading Univest’s expansion into Western PA, I’ve taken some time to reflect on my more than 30 years of banking experience. As I did, there are some key moments and advice that stand out as contributing to my success.

I’ve never liked the word “failure.” I prefer to look at mistakes, or instances where goals aren’t met, as life lessons. I’ve tried to instill this mindset in my children as well. That’s not to say there aren’t consequences in life for errors or subpar performance, but I believe these situations create learning opportunities. We can make corrections or modifications when faced with a similar situation in the future.

Mistakes are inevitable and can be a challenge to navigate as a manager. When it comes to mistakes made by the people I manage, I try to catch them early. Then I coach up those employees, providing the necessary training so they can understand why the mistake happened and how it can be prevented going forward. I also think through whether I could have done anything differently to keep the mistake from occurring. Just like I encourage it within my team, I’m constantly striving to learn and grow as well.

The greatest successes in my career have been seeing the folks I’ve managed advance their careers and take on leadership roles. That makes me feel good and I like to think that I might have played a little part in helping it happen.

There are so many people who have helped me throughout my career, and although it sounds corny, I would say that my dad has influenced me the most. His career was unique in that he went from being a blue-collar worker to a white-collar worker and then back to blue-collar. When I was entering the business world, he gave me a few pieces of advice. The one that stuck with me most was this: Talk to people.

Whether you’re in an airport or a church, at a social gathering or a sporting event, my father advised me to always talk to people because you never know where it might lead. Every day, networks are built and business deals are made because people strike up a conversation with the person next to them. Even now, my children poke fun at me on vacations because I can often be found at the pool bar, drinking a ginger ale and talking the ears off other vacationers.

Another tip my dad gave me when I first started my career was that when I finish an assigned project or task to not sit around waiting to be told to do something else. Once you’ve finished, go to your supervisor and ask if there is anything else you can help with or work on. Much like sales, don’t sit around waiting for the phone to ring. If you want the business, go get it.

On a similar note, early in my career in the corporate world, the company I worked for ran a program where you could submit a request to be “adopted” by another department for a day to see if the work interested you. Being the sly young man that I was, I submitted a request to be adopted by the CEO of the company. Shockingly, the request was accepted.

While I ended up spending most of the day with his administrative assistant, I did get to speak with the CEO for a while. “Take risks and bet on yourself like you just did,” he said. “No one else has ever asked to be adopted by me.” I kept this experience in mind as I grew in my career.

Over the past three decades in the banking industry, I’ve done it all. I went from collections to financial accounting, to Market President, and everything in between. I was “Chris” before all of these opportunities emerged, and I’m still Chris today. I’ve remained the same man at heart, while evolving professionally through many different experiences along the way. That combination has also helped me find success.

If you would like to learn more about opportunities with the Univest Family as we grow in Western PA, contact me to discover what’s possible for your career.